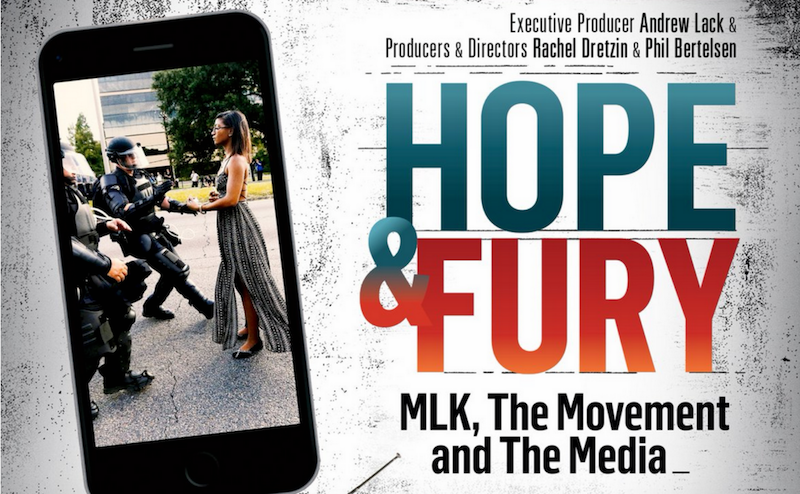 For some people it may be hard to believe that the Civil Rights Movement and Dr. Martin Luther King’s fiery impact was only 50 years ago. There are many people still living who walked and marched with Dr. King. His legacy is not from eons ago, but from present day modern America. While some people could argue that former President Barack Obama’s election and presidency was the embodiment of Dr. King’s legacy, it didn’t take long before it was clear that America still is in the midst of a civil rights violations. Directors Phil Bertelsen and Rachel Dretzin wanted to share the film because there was a direct connection between the past and present. In fact, Phil states “that the relevance of what is occurring now mirrored what had happened 50 years ago.” About Hope & Fury MLK, The Movement and the Media

Hope & Fury MLK, The Movement and the Media is a gut wrenching NBC documentary special that celebrates Dr. King’s knowledge of television and the important roll that media played in the success of the Civil Rights movement. John Lewis said it best, “Without Television, Selma would’ve been a Bird without Wings.” The irony of the calculated actions of Dr. King and his team to use print and television coverage to evoke emotion and change the narrative of how Black people in America were being treated is in some ways juxtaposition to the Black Lives Matter movement today and even to some degree Parkland youth’s “Never Again” movement.

Examples of the Media Changes the Tides of History

Hope and Fury uses Emmett Till’s mother, Mamie Till, as one of the first masterful examples of how media coverage can leave an imprint on a person’s heart. For instance, the film states, that there is not a black person in America that doesn’t know who Emmett Till was. Why? Because Mamie Till allowed his mutilated and engorged body to be displayed via an open casket and his story along with photographs of his body shared on the cover of Jet Magazine. Thus, the documentary argues that images, like that of young Emmett Till were too raw and too real to ignore.

The March on Selma marked a turning point in the Civil Rights Movement. Media outlets televised the inhumane actions of law enforcement against the peaceful protestors, which caused people from different races, gender, and age groups to rally around the movement. Afterwards Americans state-wide demanded change from Washington.  In fact, as a direct result, former president Lyndon B. Johnson quoted the old Negro Spiritual “We shall overcome” after advocating before Congress for the passing of the 1965 voting rights bill that granted for Black Americans the right to vote. The bill was passed, but now 50 years later Black Americans face voter suppression and questionable practices of excessive force by law enforcement. Even in the 21 Century Americans are still looking to overcome and positive civil rights changes to take place.

Where Can you Watch Hope & Fury MLK, The Movement and the Media

I highly recommend the documentary Hope & Fury MLK, The Movement and the Media. Readers in the US will be able to view it On Demand via your local cable providers until July 8, 2018. If you’re an Xfinity customer just use your voice remote and request to play Hope & Fury.

“For a lot of my @NewhouseSU students, this film offered images of the civil rights struggle that were different from what they expected. It was an interesting behind-the-scenes look at the way it was covered” – @JoyAnnReid at tonight’s “Hope and Fury” event at the @Newseum. pic.twitter.com/250EXhknFW

Hope and Fury Panel Discussion at the Newseum May 23, 2018

In the comment section please share one way the media has changed the way you view current events.