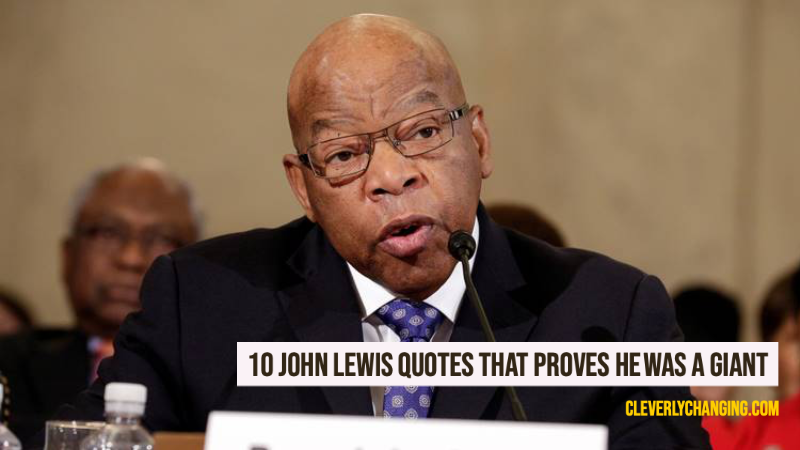 10 John Lewis Quotes that Proves He Was a Giant

I can’t remember the first time I heard about Congressman John Robert Lewis, but when I was young (still in middle school), my sister did an internship at the Martin Luther King Center in Atlanta, GA. I remember when she came home, and at the end of the summer she gave me a brochure. The brochure listed Freedom Riders and John Lewis was one of the pioneers that was alive still fighting for justice. What struck me at that early age was that he was alive. It’s easy to think that the Civil Rights Movement was something from the distant past, but to be able to turn on my TV and see Rep. John Lewis, I knew that meant that the rights and luxuries I’ve come to know are new.

Here are 10 quotes from Rep. John Lewis that will help people remember him as the giant he was.

“If you’re not hopeful and optimistic, then you just give up. You have to take the long hard look and just believe that if you’re consistent, you will succeed.” — Rep. John Lewis⁠

“I believe in freedom of speech, but I also believe that we have an obligation to condemn speech that is racist, bigoted, anti-Semitic, or hateful.”
― John Robert Lewis, Walking with the Wind: A Memoir of the Movement

“Fury spends itself pretty quickly when there’s no fury facing it.”
― John Lewis, March: Book One

“Get in good trouble, necessary trouble, and help redeem the soul of America.”
― John Lewis

“I’m not asking any of you to give any blood. I’m just asking you to go and vote like you never voted before. We have to vote.” ― John Lewis, 1965 March on Selma

“Take a long, hard look down the road you will have to travel once you have made a commitment to work for change. Know that this transformation will not happen right away. Change often takes time. It rarely happens all at once. In the movement, we didn’t know how history would play itself out. When we were getting arrested and waiting in jail or standing in unmovable lines on the courthouse steps, we didn’t know what would happen, but we knew it had to happen. ― John Lewis, Across That Bridge: A Vision for Change and the Future of America

“Rioting is not a movement. It is not an act of civil disobedience. I think it is a mistake for people to consider disorganized action, mayhem, and attacks on other people and property as an extension of any kind of movement. It is not. It is simply an explosion of emotion. That’s all. There is nothing constructive about it. It is destructive.”
― John Robert Lewis, Walking with the Wind: A Memoir of the Movement

“In terms of our elected officials, I think we need to ask…: How far should we go with our need to know before we completely veer off into the personal and the private and leave behind any chance of having a legitimate debate or discussion or discourse about the issues at hand?”
― John Robert Lewis, Walking with the Wind: A Memoir of the Movement

“Nothing can stop the power of a committed and determined people to make a difference in our society. Why? Because human beings are the most dynamic link to the divine on this planet.”
― John Lewis, Across That Bridge: Life Lessons and a Vision for Change

Honored to Meet the Giant in Person

When I met Rep John Lewis we stood side-by-side shoulder-to-shoulder. He looked up at me and gave me a smile that I carry deep within my memory. His smile encouraged me to join him in his fight for justice and equality. His smile reminded me that I always have to stand for integrity and equality. He had a silent power about him as worked a room. His presence just radiated the atmosphere not just because of his iconic status but because of his unwavering confidence and sincerity.

John Lewis’ fight for justice and quality was turbulent. During the 1965 voting rights protest in Selma he had his skull fractured by a state trooper. He also was arrested about 45 times as a result of speaking out about civil rights and from participating in protests.

Rep John passed away July 17, 2020 after losing his battle with pancreatic cancer.

Beginners Can Learn the Ropes From Investment Podcasts

Investing is the best way to prepare for ...