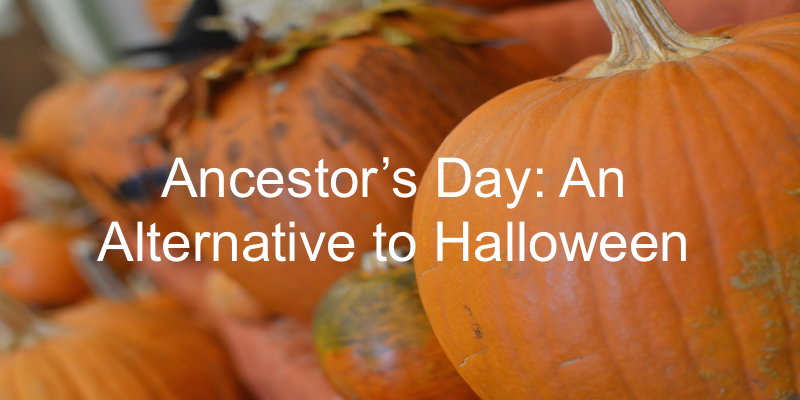 Ancestor’s Day: An Alternative to Halloween

By
12 min read
In Parent
0
It’s almost Halloween, and I am probably one of the least festive people I know. I enjoy family gatherings, so there are some holidays that I truly look forward to (although I rarely participate in the traditional sense). I’m all about family. But I’m not fond of trick or treating, haunted houses and the rest, so I’m doing something new this year. Sort of piggybacking Mexico’s Día de Muertos or The Day of the Dead. Perhaps I will call it Historween. Ancestor’s Day sounds better though. I’m hoping that it will catch on and become a big hit with my children and make Halloween all about family. I know there are plenty of people who don’t celebrate Halloween. Some people don’t do Halloween for cultural reasons. Others for monetary reasons. Growing up, I only remember going trick or treating twice. As a child, not celebrating Halloween was a religious thing. Something that I always questioned, mostly because I wanted candy, but also because I wanted understanding. I’ve always been that one who asks the question, “But why?” And, “According to who?” I often receive unsatisfactory answers or answers that lead me to further questions that I have to dig into on my own. I was the little girl with “the problem with authority.” I didn’t mind then, and I still don’t.

I’m an adult now with a family of my own. My partner and I are not religious, we are truth seekers, children of our ancestors, light beings. To many, we are “out there” and that’s okay with us. We are raising free people who have respect for all and sound, right judgement. Our goal is to try to cultivate lifelong learners that are self-sufficient and community minded. Also, we are raising educators, healers, problem solvers, innovative and independent thinkers who embrace their creativity and unique differences wholeheartedly without shame. I say this because I don’t want anyone reading this to get the impression that our not taking part in religion and having a different concept than most of what and who the Supreme Being is means that I and my family are somehow without morals or direction. The History of Halloween

Here’s a brief history. Halloween began centuries ago as the Celtic New Year’s Eve celebration. Samhain, summer’s end, is what they called it. Located in the northern hemisphere, the winter meant darkness, no harvests, and death. It was the one day of the year where the line between the living and spirit world became blurred. To keep the evil spirits away, they lit bonfires and wore costumes to confuse any bad tempered spirits looking to possess a living body. When the Romans conquered much of the then known world and decided to unify the Roman Empire with Christianity, Samhain became a part of Feralia, which is a Roman holiday that honored the dead. By the 10th century Pope Gregory III created All Saints Day (November 1) and it was often celebrated much like Samhain. The increase of Irish and other European immigrants to America in the 1800s helped shape modern American Halloween celebrations.

I recognize that American culture (as long as I am in this country) will dominate what my children see. This means that many of the commercials, store displays, schools, libraries and their peers will be preparing for and promoting traditional Halloween activities. And of course, they will want to take part in it. Knowing this, I began to think of ways I could let them feel included and festive without doing the traditional Halloween thing. I understand that Halloween is supposed to be a fun and lighthearted holiday. Children can have a fun time sharing treats and trading harmless tricks while also pretending to be someone or something else. The element of the fantastical, mythical and surreal combines to make one interesting celebration. But as I am trying to instill in them a sense of belonging in a world that often seeks to minimize them or even erase them. I want them to be confident in themselves and know who they are and where they come from. Having a rich history of self is important in creating confident children. That’s why my new alternative to Halloween tradition will help to fortify their self-awareness.

The Alternative to Halloween

Therefore, here is my long awaited solution, I will create a scavenger hunt for the family. The clues will feature true stories, names of our ancestors and African and Native American proverbs. Each clue will lead them through different time periods.  As they search through the house there will be caches of candy, treats and toys to be found. When I told my partner my initial idea of hiding candy around the house with ancestor’s names attached, he said, “Sounds good.” I don’t think he’s ready for the fully fleshed out concept, but he’s going to have a blast. I really think they’ll have a lot of fun and learn new and exciting facts from the past. As I’m writing this, I’m also thinking that we may even bake our own treats like Haitian chocolate brownies, limey bars, which sounds like a yummy and interactive way to get my little people fully invested. With that said, I want to honor my ancestors everyday. I want to remember them each day, doing my part to keep them alive. Because our DNA never forgets, I know that looking in the mirror is more than a reflection of me. It is an interactive experience. What I see in the mirror is centuries of innovation, ambition, hard work, pride, love, experience and so much more. I am part of the culmination of their hopes and dreams for the future. Of course many of them have never seen me, but their wisdom is available to me and my children by stories and artifacts that are available.

No, I’m not going to go around my neighborhood (or a more affluent neighborhood looking for the best treats and decorations—yes, I have done that before; don’t judge me) trying to get candy and dodging cars. I’m not going to spend money on costumes, face paint or decorations. I’m going to make this Halloween and subsequent ones all about FAMILY. I hope you enjoy the holiday, however you choose to spend it.

Beginners Can Learn the Ropes From Investment Podcasts

Investing is the best way to prepare for ...