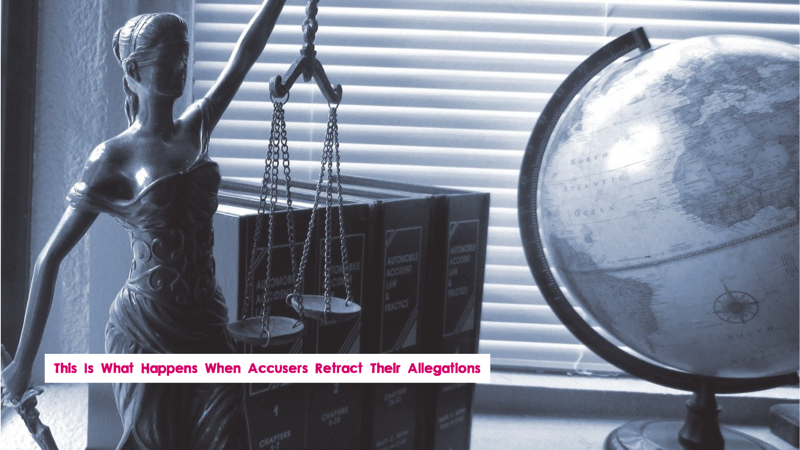 This Is What Happens When Accusers Retract Their Allegations

What Happens When Accusers Retract Their Allegations of a Sex Crime? If there is an accusation of a sexual assault it should always be taken extremely seriously from the beginning. The minute a statement of allegation is launched against an individual, that person should immediately retain a sex crime attorney.

If someone is sexually assaulted on the street, in a crowded public transportation vehicle, or taken somewhere against their will and forced to have sex, then it is considered rape. There are clear and precise definitions of rape.

There are many different variables and emotions that come into play once a pair of people interact in a sexual way. A change of mind is not a reason to accuse someone of rape and is never acceptable in a court of law.

Even people in the room, deemed as witnesses, can be wrong at times. There is no room for assuming anything in determining the merits of such a serious crime.

It is the job of the prosecutor to determine if the case should be presented before a judge and jury. Just because a police department has determined a rape has occurred does not mean the one found guilty will face charges in a court of law.

What Happens to The Accuser

When someone accuses someone else of rape, and it is proven to have been a false accusation, the accuser could face severe consequences. The one who was accused needs to contact a lawyer immediately if they are told someone lied about them raping someone. That person, the accuser, will need to set the record straight in front of a judge as soon as possible.

If there were any settlements against a company or city where the alleged rape happened, those monies will need to be paid back. It will be up to a judge, and not necessarily the same judge from the original case, to determine if the accuser will face any jail time for their false accusations.

Again, there are many different factors that come into play when someone is accusing someone of violating them in a sexual way. There are even more issues an individual faces when they decide to recant their statement and set the record straight.

False accusations of rape can be hard to prove, but they do happen. It is important to have legal representation and not try to defend yourself against such a serious crime.

5 Lessons Kids Can Learn From Camping

Camping may seem so simple at first glance, but there are many lessons kids can learn from camping such as communication skills, teamwork, nature appreciation, survival skills and more.