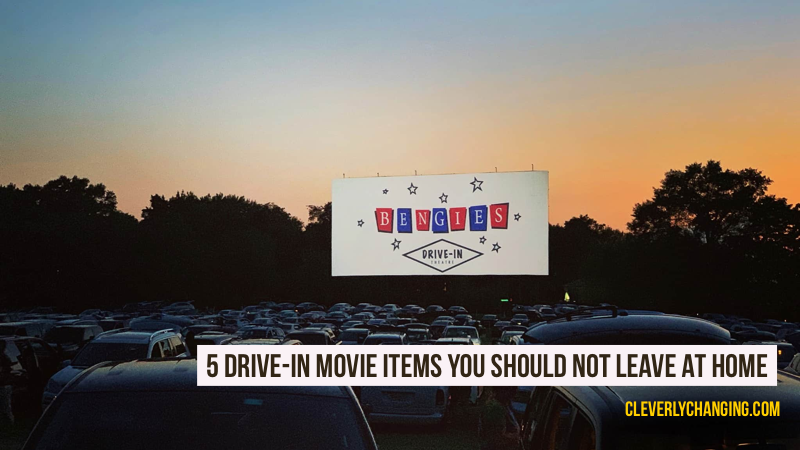 Have you ever been to a drive-in movie? Sounds like a question from the past right? Well, there are a few Drive-In Theaters that still exist in the United States and I recently had the opportunity to visit one located in Baltimore, MD. I am really anticipating my second visit so I wanted to write this post because I know that there are families looking for safe and fun activities. Here are 5 things I’d recommend people to bring to a drive-in movie.

Bengies in Baltimore, MD charged extra to purchase a permit for cars that brought in outside food. The charge at the Baltimore location was $15 and the payment had to be made in cash.

Every vehicle is different but, if you want to be able to turn your car completely off, then bring or rent a portable speaker. It is not uncommon for there to be an outlet in the parking lot, but keep batteries on hand just in case you park next to an outlet that isn’t working.

Many drive-in theaters will have restaurants, but if you have special dietary needs then pay a little extra and bring your own outside food. Especially if you have favorite movie snacks that you would like to enjoy.

I took a picnic blanket and sat outside the car, but after awhile the ground felt hard so I wish I had brought lawn chairs instead. Foldable lawn chairs are great because they allow you to put them in the trunk of your vehicle for the ease of transport.

Next time that I go to a drive-in movie, I will probably also take my airport pillow with me, to make the experience is even more comfortable. We were in a party of four, and the backseat area wasn’t very comfortable so I would recommend the group in the back seat seat enjoy the experience from outside of the vehicle.

If you’re at a drive-in movie theater in the summer, then your car is going to be hot, even with the windows rolled down. Therefore, sitting outside after the sun has gone down may be much cooler. So if you plan on enjoying the movie outside use bug spray to keeps the bugs away.

Overall, enjoying a movie outside under the stars is an enjoyable and fun experience. In the comment section below let me know if you have ever been to a drive-in movie, if so, what is one thing that you think people should bring with them.

Check out the information below if you want to know how you can visit the drive-in and watch a movie for FREE.

“A NIGHT AT THE DRIVE-IN”

A CELEBRATION OF MULTI-CULTURAL VOICES IN FILM

Summer Screening Series Curated by Michael B. Jordan will Launch at Select Drive-Ins
Nationwide and Play Throughout the Summer at

No Cost to the Community

A special thank you to Amazon Studios and Michael B. Jordan’s Outlier Society. Thank you so much for launching “A Night at the Drive-In”, a nationwide summer screening series that will run through every other week through the end of August.

“With this drive-in summer series, I hope that friends and families are able to not only enjoy, but to learn and grow,” said Michael B. Jordan, Principal of Outlier Society. “Now more than ever, amplifying Black and Brown stories means engaging culture to speak to hearts and minds about the world we live in. As we use this opportunity to reimagine community and proximity, I am excited that these films will be shared and celebrated all across the country.” – from press release.

As part of the concessions for the screenings, all attendees will receive refreshments provided by Black and Brown owned businesses, which are Path Water, Pipcorn Popcorn and Partake Cookies.

Save the Date for More Drive-In Movies

The program will run through the end of August 2020. Below is the list of theaters.

“Outlier Society is a cutting-edge production company focused on bringing an eclectic and inclusive lineup of diverse stories and voices to market, meeting the viewers where they are. The company was founded by Michael B. Jordan in 2016 and was one of the first companies to publicly adopt the inclusion rider. In February 2019, Jordan and Outlier launched the Outlier Fellowship – an internship and mentorship program providing access, opportunity and community to underrepresented young people entering media, arts and entertainment.

Under the helm of President of Production Alana Mayo, Outlier Society has co-produced the Emmy-nominated HBO Films’ adaptation of “Fahrenheit 451”, which netted Jordan a Producers Guild Award, and the critically-acclaimed Warner Bros. film, “Just Mercy”, which was awarded a number of accolades including the NAACP Image Award for ‘Best Picture’, the ABFF Award for ‘Movie of the Year’, and a BET Award nomination for ‘Best Movie’. Their impressive slate of upcoming projects includes Paramount Pictures’ ‘Without Remorse’, the Denzel Washington-directed feature ‘Journal for Jordan’, and the Danny Boyle-directed ‘Methuselah’, with Jordan set to star in each. Additionally, Outlier Society’s upcoming slate includes the film adaption of the fantasy novel ‘Black Leopard, Red Wolf’ by acclaimed author Marlon James; an untitled original monster movie from ‘Kong: Skull Island’ filmmaker Jordan Vogt-Roberts; a WWII action drama ‘The Liberators’; psychological thriller, ‘The Ancestors’, starring Tika Sumpter for HBO Max; ‘61st Street’ for AMC; the second season of RAISING DION which was one of Netflix’s most-streamed shows of 2019; and the second season of the OWN drama series ‘David Makes Man’ from Oscar-winning MOONLIGHT co-writer Tarell Alvin McCraney. The first season was nominated as “Best Drama Series” for a Critics’ Choice Award and a Broadcast Film Critics Association Award, as well as for a Peabody Award and a Gotham Award.” From the press release.