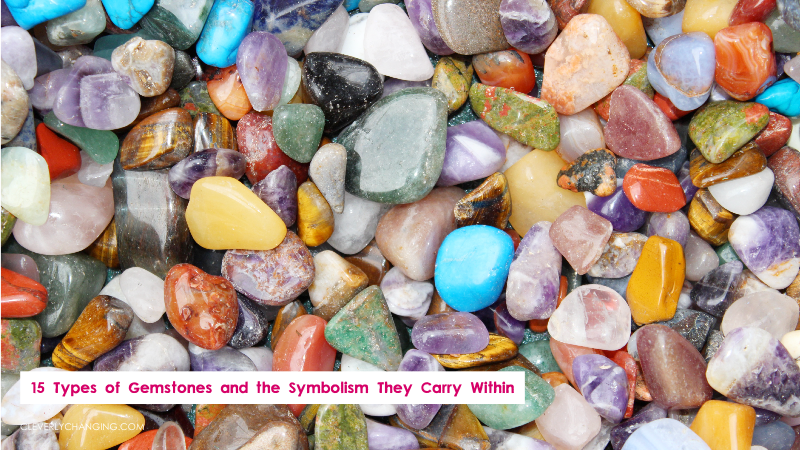 15 Types of Gemstones and the Symbolism They Carry Within

Diamonds are a girl’s best friend, or so people have been told for years now. However, gemstones have symbolic meanings that many people remain unaware of. Is there a gemstone that has a special meaning and speaks to you? What do different gemstones mean in other cultures and countries?

When you go to buy jewelry that has gemstones, don’t overlook those pieces containing one or more amethyst stones. Ancient Greeks associated this stone with Bacchus, the wine god, and believed the amethyst could prevent a person from getting drunk off of this beverage. In addition, many people feel wearing an amethyst ensures they remain quick-witted and clear-headed. In the Bible, amethyst is described as one of the gemstones used to line the walls of Heaven.

When one sees aquamarine gemstones, they likely think of the ocean or another body of water. In fact, many individuals believe sailors who wear this gemstone will remain safe while out on the water. Men and women may choose to wear this stone, as it remains abundant today. Those who do so are believed to be imbued with mental clarity, good health, and courage.

If you are looking to add more joy to your life, consider purchasing jewelry adorned with citrine. Often referred to as healing quartz, people believe this gemstone brings energy and vitality to the wearer. In addition, followers of Chinese Feng Shui philosophy feel the wearing of this gemstone leads to abundance and wealth.

Did you know placing an emerald under the tongue provides the individual with the power to see into the future? This life-affirming stone is said to symbolize integrity and loyalty. Furthermore, many cultures believe it can protect the wearer against evil spells while ensuring a partnership remains in balance. Anyone suffering from a disease may wish to wear emeralds, as it is believed this gemstone can cure them.

In ancient times, jewelers would add garnets to their pieces in an effort to protect the wearer against negative energy. However, this stone was commonly associated with nobility and members of the clergy. For instance, pharaohs in ancient Egypt were often seen wearing necklaces with red garnets, while ancient Romans often used a ring made with a carved garnet when they needed to stamp an important document sealed with wax.

Serenity is a word people commonly use when talking about jade. Wearing it may help relieve a person’s anxiety and fear. In addition, it may bring them luck and prosperity. People who wear this stone often do so in an effort to hold on to their money, as this ability has been linked to the gemstone. Gardeners love jade, as it is said the stone will guarantee a bountiful harvest.

Opals come with a feature many people love. A person can see several colors within a single stone. As a result, many people associate this stone with supernatural powers. Ancient Romans saw this gem as a sign of hope and love, while ancient Greeks believed the stone would provide the wearer with the gift of prophecy while protecting them from disease. Europeans feel this gem symbolizes purity, truth, and hope.

Pearls are viewed as a symbol of wisdom today, but that wasn’t always the case. Residents in ancient China believed the pearl would protect the wearer against fire, while Europeans saw this gemstone as a representation of purity and chastity. Today, some people continue to view the gemstone as a sign of innocence. In addition, other people see it as a stone that will attract wealth and luck. It’s all in the eye of the beholder when it comes to the symbolism of this stone.

Peridot serves as an alternative to emerald and jade for those who love green gemstones. In fact, it is believed to be among the most ancient of all gemstones today and was first unearthed inTopazios, an island more commonly known as St. John’s Island. Today, historians believe some of the emeralds worn by Cleopatra were actually peridots. Egyptians felt the stone would prevent nightmares while providing the wearer with good luck, health, and confidence.

Gentle love and pink rose quartz go hand in hand. Individuals in relationships turn to this stone when they want peace and calm in their interactions with their significant other. It helps eliminate negativity while healing emotional wounds.

According to ancient Hindu tradition, men and women who offered the god Krishna rubies would be promoted to emperor when they were reincarnated. They weren’t the only ones who attributed special powers to this gemstone. Individuals in Burma and India felt rubies would provide them with peace and safety, while men and women in medieval Europe believed they would guarantee success in love, along with health and wisdom.

Sapphires serve as one of the four precious gemstones together with diamonds, emeralds, and rubies. Men and women view the sapphire as a symbol of fidelity, and Prince William chose a sapphire surrounded by diamonds for Kate Middleton’s engagement ring. In fact, sapphires were popular for engagement rings long before the diamond took center stage.

Topaz stands as a representation of fidelity and love. Wearers get strength and intelligence when they wear this gem, as reported by the Old Farmer’s Almanac. This gem heals and recharges individuals. In addition, it promotes truth and forgiveness. People believe this gemstone can help calm a person’s temper while helping alleviate the symptoms of depression.

Many cultures have attributed special powers to this gemstone. Many Southwest Native American tribes used turquoise pieces to protect them, while ancient Persians felt wearing this gem safeguarded them from the evil eye. This belief continues in modern-day Iran.

Zircon has been a highly coveted gemstone since the Middle Ages. Individuals feel it can help promote wisdom along with spiritual growth. The wearer might also discover peace and beauty, according to some who believe in its powers. According to folklore, it may help alleviate pain and stop nightmares.

Learn more about additional gemstones and their meanings. People who do so find they may want to purchase jewelry with different gemstones to meet different needs. You may choose to do the same once you learn more about these magical stones.

I am a blogger, speaker, educator, wife, and mom to twins. After becoming a mother I have learned to realized that life is short. In the past, I use to analyze everything and everyone, but as I grow, I accept that loving others is what really matters in life. Through my blog I am sharing with you the love I have for my husband, my children, and myself. I am on a mission to cleverly help empower and uplift others so you too can enjoy your life and live freely.
Load More Related Articles
Load More By Elle Cole
Load More In Live