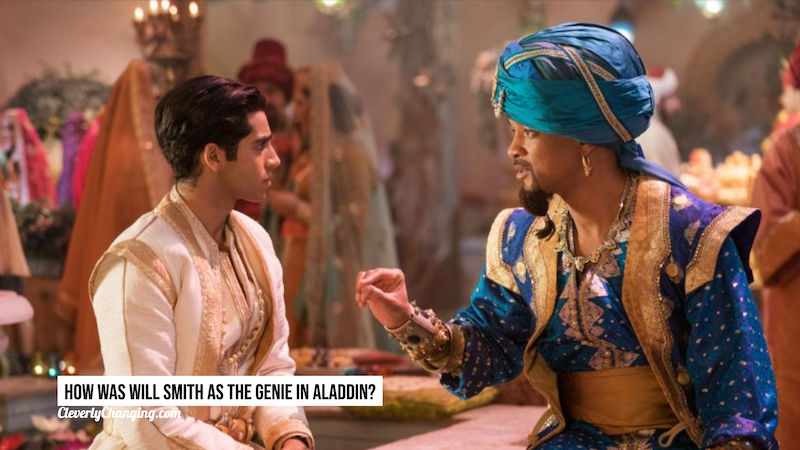 Will Smith as the Genie In Aladdin

In 1992, the first Aladdin charmed its way into the hearts of kids across the country. I was 10, the same age as my daughters are now when I saw Aladdin and the music struck me the most. When I found out that Disney was thinking of making a nonanimated version I felt nostalgic and worried at the same time. This remake would either be captivating for the old and the young or it would just be for new audiences who would be introduced to the fanciful story.

Thankfully, after watching the screening I’m happy to report that the 2019 version of Aladdin is pure entertainment and can absolutely stand on its own. My 10-year-old daughters are not fans of musicals like I am, but even they were pleased with the movie. I should also let you know that they have only read the book and have not seen the animated version yet. While in the theaters they were on the edges of their seats.

Whenever I see a new movie, of my friends ask me if the movie is scary.

Well, my friends with really small little ones, this is a great movie. However, if you have a child who is afraid of the dark, then this may be one that you want to pass. There are a few scary parts for the young and squeamish. This post has no spoilers, but for those that are curious, the scary parts are in the same places as the animated version. Now, if you don’t mind your kids being a little scared, I think the movie is very entertaining so I would take my little ones.

A thrilling and vibrant live-action adaptation of Disney’s animated classic, “Aladdin” is the exciting tale of the charming street rat Aladdin, the courageous and self-determined Princess Jasmine and the Genie who may be the key to their future. Directed by Guy Ritchie, who brings his singular flair for fast-paced, visceral action to the fictitious port city of Agrabah, “Aladdin” is written by John August and Ritchie based on Disney’s “Aladdin.” The film stars Will Smith as the Genie; Mena Massoud as Aladdin; Naomi Scott as Jasmine; Marwan Kenzari as Jafar; Navid Negahban as the Sultan; Nasim Pedrad as Dalia and Billy Magnussen as Prince Anders.

Will Smith as the Genie

So, the question of the day, how was Will Smith as the Genie. Of course, Smith had big shoes to fill. Robin Williams was a fantastic and hilarious genie. He gave us comedy with tons of laughter. On the contrary, Will Smith totally made the role his own and charmed us. He brought romance and strength to the genie’s character. Viewers also get to hear Will Smith sing. While he is no Frank Sinatra, he can carry a tune and sound pretty good.

Overall, I enjoyed the movie and I’m glad I watched it. I’m also definitely willing to watch it again with my children. My favorite part of this 2019 version was the princess Jasmine’s singing voice. She sings beautifully, and I really enjoyed her solos.

Stay Up-to-date With the Movie

The movie enters theaters across the nation May 24th

Comments are always super appreciated thanks!