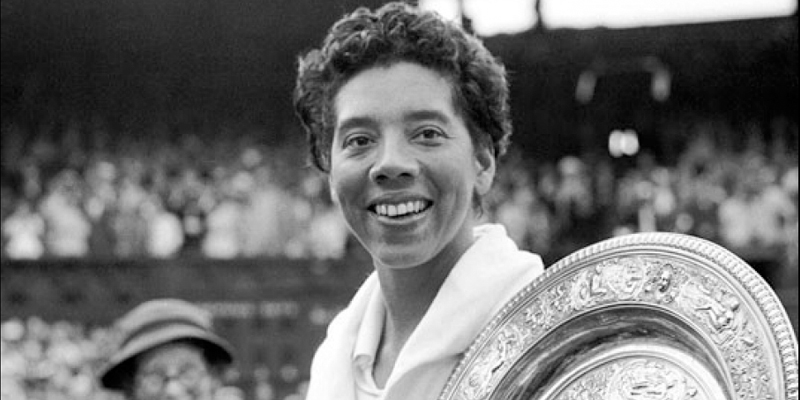 Today I’m highlighting Althea Gibson, 11 Grand Slam champion and the first black person to win a tournament at Wimbledon,  because she lived a life that gives children who may not follow a straight and narrow path, hope. In America and all over the world children are living lives under horrible circumstances. Many will not be able to function clearly, without distraction; however the life of Althea Gibson tells us that if a person can learn how to focus and develop self-determination and skills they could live amazing lives.

A.K.A. “Nothing but trouble”

Born in South Carolina on August 25, 1927 to sharecroppers (her parents picked cotton for a living).  At the age of 3 years old her family moved to Harlem, NY to live a better life. However, life in the big city with 5 small children, wasn’t great, they were extremely poor and had to live on public assistance. Althea’s teen years were tumultuous and she was often called “Nothing but trouble.” She didn’t do well in school and eventually dropped out. Throughout her adolescent years she was rebellious and was a tomboy who often ran away from home.  She was wild child and her parents felt like she was out of control.

From Troubled to Courageous

However, despite her troubled past Althea’s story is one of courage. Throughout her life she met many naysayers and people who thought she was she was a rebel, but instead of internalizing their hurtful words, she believed in herself, her talents, and did what she loved to do: play sports.

Sometimes when troubled teens turn a new leaf in their lives, there is someone who enters their corner and makes a difference in their life. For Althea, there were several people who took an interest in her around the age of 14. Although she was a high school dropout, Rhoda Smith, a member of the upscale Harlem Cosmopolitan Club, took an interest in her and bought her the things she needed, taught her about life, and encouraged her. Later, two surgeons and Sugar Ray Robinson and his wife pleaded with her to return to school. At the age of 21 she finished high school in North Carolina and received a scholarship to attend and play tennis for Florida A&M University in Tallahassee.

Everything in her life seemed to change as she grew older. She had hope and a fervent passion for tennis. Even though she continued to have a rough demeanor, and wanted to fight after she lost a tennis match, she eventually found a cause and a goal to fight for without being physical.

I admire Althea Gibson because she didn’t give up on herself. I believe, it is tenacity that helped her achieve insurmountable goals throughout her athletic career. In 1953 she graduated from college with a physical education degree and began to make a name for herself in the tennis world. I truly love her story because it encourages parents, never to give up on a child.

“She was the first to break the color barrier of the American Lawn Tennis League in 1950 and played in the U.S. National Tennis Championship in Forest Hills. She became the first African-American player to play in Wimbledon in 1951. She won the French Championship in 1956. She won in Wimbledon in 1957, the trophy presented to her by Queen Elizabeth. She successfully defended her Wimbledon title in 1958. She won the U.S. National Tennis Championship at Forest Hills in 1957 and 1958. She retired from Tennis in 1958 and played for a while with the Harlem Globetrotters. She also broke the color barrier in golf, launching her golf career in 1964 and joining the LPGA” (E. Valerio).

Who was Althea Gibson? Althea was a rebel who became a barrier breaker and an extraordinary American athlete. As parents, even when our children don’t march to the beat as we would like, we have to continue to recognize their gifts and encourage them to pursue their dreams.

I am a blogger, speaker, educator, wife, and mom to twins. After becoming a mother I have learned to realized that life is short. In the past, I use to analyze everything and everyone, but as I grow, I accept that loving others is what really matters in life. Through my blog I am sharing with you the love I have for my husband, my children, and myself. I am on a mission to cleverly help empower and uplift others so you too can enjoy your life and live freely.
Load More Related Articles
Load More By Elle Cole
Load More In Inspirational Stories